Home > News > Year Ending in a Stream of Outages

Year Ending in a Stream of Outages

December has been a strong month for hackers who have taken out some industry giants as the year is coming to a close. Amongst those affected include Xbox Live and the PlayStation Network, Rackspace, and for the third time in a week, North Korea. The main cause of these outages are all said to be as the result of distributed denial of service attacks (DDOS) attacks from different hacking organizations.

Xbox Live and the PlayStation Network

Lizard Squad is believed to be behind the DDoS to overwhelm XBox and Playstation’s servers. Reports also state that another group of hackers, the Finest Squad, were fighting back against Lizard Squad’s attempts to take down XBox. According to Finest Squad, the PlayStation Network is currently offline due to an executive decision by Sony.  As shown by these tweets from both groups: 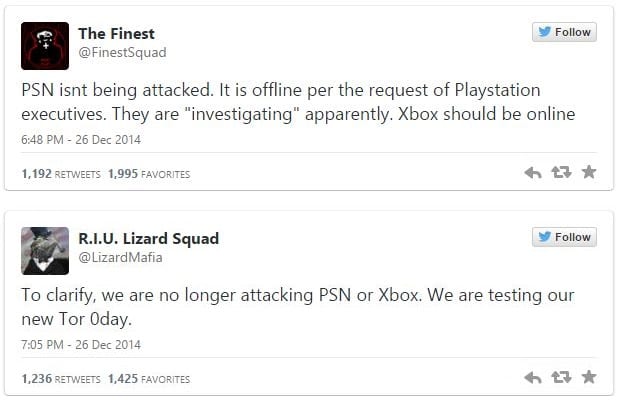 Earler this month the CTO of webhosting giant Rackspace, John Engates reflected on the increasing number of cyber-attacks over the past year and stated that: Trends over the last year with an increased number of hacks have shown that companies are struggling to respond to and cannot prevent these attacks.

This point was reinforced when Rackspace themselves also experienced the wrath of a DDOS attack that crippled the company’s DNS servers for 11 hours earlier this week. This resulted in the outage of their flagship rackspace.com domain and 11 other subdomains connected to it. The attack affected three of Rackspace’s data centers IAD, ORD, and LON data centers (North Virigina, Chicago and London.)

The attack was confirmed by a post on Rackspace’s Google plus page, “December 21st, at approximately 23:54 CST, backbone engineers identified a UDP DDoS attack targeting the DNS servers in our IAD, ORD, and LON data centers. As a result of this issue, authoritative DNS resolution for any new request to the DNS servers began to fail in the affected data centers. In order to stabilize the issue, our teams placed the impacted DNS infrastructure behind mitigation services. This service is designed to protect our infrastructure, however, due to the nature of the event, a portion of legitimate traffic to our DNS infrastructure may be inadvertently blocked. Our teams are actively working to mitigate the attack and provide service stability.”

The issue was resolved by Monday 22nd and no one has yet claimed responsibility for the DDOS attack while Rackspace is investigating into the probable reasons for the attack. Full details have yet to be revealed by Rackspace from their Root Cause Analysis. A number of Rackspace users reported significant losses as a result of the outage. Some users posted their frustration on Rackspace’s page:

North Korea blamed the U.S. and called President Obama a “monkey” today when the country’s Internet and mobile network went down for the third time this week. This continues the increasing hostility between North Korea and the United States over the hacking of the film studio Sony Pictures. However, it’s still not clear if in fact it is American hackers who are responsible for the Internet outages.

President Obama is currently on vacation in Hawaii with his family and has not yet released an official statement over this, but the U.S maintains denial of responsibility. The National Defence Commission however, dismissed the denial of involvement stating, “The United States, with its large physical size and oblivious to the shame of playing hide and seek as children with runny noses would, has begun disrupting the Internet operations of the main media outlets of our republic.”

With only a few days left of 2014 time will tell who will be next.