Synergy Research has released a report regarding the major cloud service providers in the world. The data suggests that Amazon AWS has dominated this market. When you compare the growth of Microsoft, IBM, SalesForce, and Google’s cloud services over the third quarter of 2013, Amazon beats all of their revenue combined. Synergy Research Group recently released this chart depicting Amazon’s domination of the IaaS and PaaS markets. 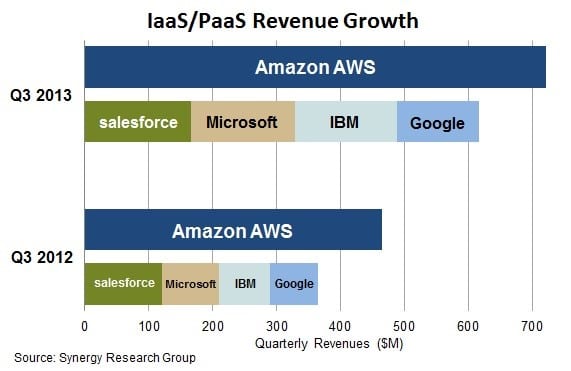 The report went on to talk about dollar figures. One milestone that was reached in this quarter was the $2.5B in revenue for the industry as a whole. Another staggering statistic is Amazon’s overall growth. From 2012 Q3 to 2013 Q3, Amazon AWS grew by 55% while taking a larger overall market share away from the other 4 main players in the cloud. That’s not to say that the other companies didn’t experience growth. Each of the companies listed have experienced significant growth between 2012 and 2013.
Synergy indicates that the overall market for IaaS and PaaS grew 46%. Experts expect this trend to continue for the next few years. Some analysts think that these stats could be skewed. For example, the chart above does not discuss the companies whom are deploying OpenStack clouds to their clientele. Regardless of how you may interpret Synergy’s data, other players in the IaaS and PaaS game are going to have to significantly step up their operations in order to establish themselves within the cloud marketplace.
Amazon’s rise to the top is a result of the corporate culture within the company. Amazon is notorious for low overhead on high demand items. Amazon AWS operates within this model and they were the first vendor to seriously market their cloud services as something that every organization can utilize. While companies like SalesForce and IBM may be considered niche cloud providers, they will look to shed that label and take a slice of Amazon’s acquired market share while building new client relationships going forward.