The History of Cloud Computing

Around the year 2000, which in the computer age is a long time ago, some companies thought they could make money operating as Application Service Providers (ASP).  Sallie Mae, the student loan lender, started a company called Sallie Mae Solutions.  Their idea was to let colleges and universities use Oracle Financials software over dedicated phone lines in the Sallie Mae data center.  The company signed up one college then went out of business.  They had a good idea, but were too early to market, as the concept of cloud-computing had not yet grown widespread.  As any seasoned businessman would tell you, it is difficult to make your own market. 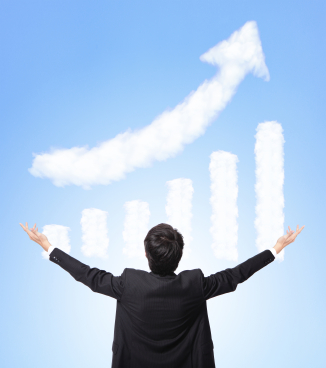 Meanwhile, a company with much more marketing prowess, and technical ability, was quietly programming something called Amazon Web Services (AWS).  The idea was that small companies and independent software vendors could tap into Amazon’s mighty sales engine to add sales order processing to their own systems.  Their offering expanded to provide customers their own virtual servers.  This gave customers a login screen and a command prompt, just like it was their own computer.  A developer sitting at home who wanted to learn how to program Amazon AWS could sign up for free and start writing applications.  Amazon.com now calls that Amazon Elastic Cloud Compute (EC2).  It starts off free, but then the meter starts running.  The fee you pay depends on the volume of transactions in your application.  So a small company can grow quite large at Amazon EC2 without having made a large up-front investment in computing facilities.
Amazon expanded their service offering to accommodate different customer needs.  Some customers wanted a place to store their archived data.  Some customers wanted to keep their front-end computers in-house, but use a back-end database located at Amazon.com.  Amazon’s cloud-service has grown so large now that it even hosts the many computers and databases than make up the mighty NetFlix video streaming service.
Amazon called their offering AWS, because it used something called web services (WS).  This is a technique to make programming easier over the internet.  Your application interacts with the back end application, i.e. the business logic and the database, by sending a text message (XML), which is an object containing, for example, a sales order.  It is simpler to send text that an object, since that requires the sender and receiver to agree on some kind of shared protocol to transmit the object.  There is no need to agree on the XML protocol, because the Internet already works that way; web sites use ordinary text to send messages to the browser.
SalesForce.com had a different idea.  Their idea was the same as Sallie Mae Solutions, except the market was ready for it this time.  Starting in 1999, this company has grown from offering its sales force automation system to a few clients to over 100,000.  Their software is of the type called “CRM” or customer relations management.  Siebel is their largest competitor.  While sales people were using SaleForce.com to make sales and track quotes, other companies spent months and even years working on their highly complicated Siebel installations.  Now SalesForce.com has gone mobile.  You can tap into it from your customer’s location with your cell phone and enter sales orders right in your customer’s office.
What made all of this possible for SalesForce.com and Amazon.com was software that came from a company called VMware, founded in 1998.  They were the first in what is called “virtualization.”  That idea is to take one computer and divide it into many.  So you can have company X and company Y share space on the same computer, yet keep their data separate.  You can even run Windows and Linux, i.e., different operating systems, on the same computer.  Grow this by an order of magnitude and now you have hundreds or thousands of companies all using the same set of shared computers doing quite different things for different applications.  That is the classic definition of cloud computing.
Now there are hundreds of cloud service providers in the market.  These include not only the biggest companies—Microsoft (They call their service Windows Azure.), Google (Google Apps Engine), IBM (They bought the cloud-service provider SoftLayer.)—, smaller companies, like RackSpace, are also in the game.  These smaller companies were at the forefront of cloud computing; some have now been bought up by bigger companies who want to add the word “cloud” to their brand, so that they do not miss out on this paradigm shift in the business and end up in the dustbin of history.
One of the early cloud companies is Cloudera.  What drove them to success is BigData. BigData has become another concept that is in vogue.  What it means is taking extremely large amounts of unstructured data and storing it so that one can spot trends, make forecasts, and do other types of statistical analysis.  This has applications for meteorology, genomics, physics, and business.  BigData, by definition, does not fit onto one computer, which is why they call it “Big.” Instead it is spread over a whole network of computers.  Cloudera was in the right place at the right time, when companies realized they had no place to store BigData.
Companies that sell to consumers and not business have adopted the cloud too and use that term when running a marketing camaping. Examples of this include Apple iTunes.  Now you can buy movies and music on iTunes and then listen to it from anywhere and not just on your iPod.  Amazon’s Kindle too works the same way.  You can either read books and magazines on your Kindle, or read them in their cloud-based reader.  Tablets that run Google’s Android store almost no data on the tablet; instead it is stored in the Google cloud.
The cloud computing concept is still coming together as companies struggle to see which vendors and which standards will come out on top. Some companies that were leaders in the hardware and software business 10 years ago are going to go out of business; other companies will thrive.  Cloud computing has definitely changed the landscape for companies who are used to running their own data centers.  Now that ideas seems old-fashioned and awkward.