England-based Backup Genie may be a relatively new company, but there’s no question that its team is driven to succeed, and that its customers are reaping the benefits.  Like many online backup providers, Backup Genie provides a free trial version for a limited number of files, as well as multiple options for their paid subscription plan so that users can choose exactly what they need.  With backup available not just for computers but for mobile devices such as cellular phones and tablets as well, Backup Genie allows users to protect all of their important information in one centralized location.
To learn more about Backup Genie, visit BackupGenie.com.

One of the standout features provided by Backup Genie is that the company offers not just the ability to store data from multiple locations, but the ability to sync data across multiple platforms, such as Windows XP to Windows Vista, Android to iOS and other platforms to each other without exception.  To streamline the data syncing and retrieval processes even further, Backup Genie offers well-developed iPhone and iPad apps as well as a mobile-friendly version of their site for anyone wishing to access their files via web browser.

Users should be aware that some Backup Genie features are available for an additional fee.  These include the purchase of additional storage space once you’ve reached your quota, the addition of other computers and the backup of network drives.

It may not be easy to pull a genie out of a bottle, but it is very easy to install and run Backup Genie on any computer or mobile device.  The installation is done in three quick steps, and the backup will begin automatically.  Once the service is set, backups run regularly in the background of the computer so that there will never be files that are accidentally forgotten.  Retrieval of files can be done using the control panel which is laid out in a clear, intelligible manner so that users can see at a glance exactly what actions they may need or want to take.

Synced folders and backed up folders are both listed on the left side of the dashboard, so that users can find their files easily no matter how they were saved.  Within the settings section of the control panel, users can schedule their backup if desired, choose specific folders to backup at any given time and pause their backups during specific times (such as during times when the computer is not plugged in, for example). 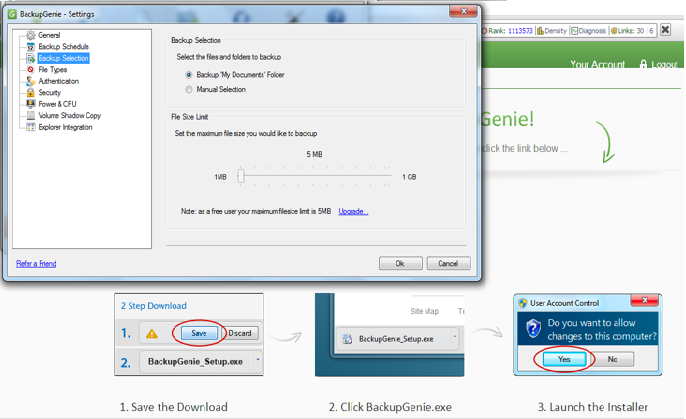 Prospective Backup Genie users can choose from one of three personal plans which offer identical features but differ only in the amount of storage space offered.  The choice is between 75GB, 250GB and unlimited storage.  The pricing page clearly explains how much a user can store with each plan.  For example, 75GB of storage will accommodate 6,000 documents, 10,000 pictures and 10,000 songs. The 250GB plan will support the backup of 10,000 documents, 20,000 photos and 15,000 songs.  Plans can be purchased for increments of 1 month, 6 months, 1 year or 2 years, and the price per month gets cheaper for each longer plan.  The 75GB plan starts at $4.49/month, the 75GB plan can be purchased for as low as $6.95/month, and the Unlimited plan starts at $9.95/month.  Business plans are designed to accommodate up to 5 computers and can be purchased for a starting price of $19.95/month.  Extra computers for both personal and business plans can be added for an additional fee.

Unlike some online backup services that offer only 256 bit SSL encryption, Backup Genie uses a combination of 256 bit encryption and 128 bit SSL encryption, to ensure maximum security for all replicated files.  This encryption technology is the same technology used by the world’s most secure websites, and it works to prevent hackers and other cyber criminals from accessing any information inappropriately during the data transfer process.  In addition to securing all files during the backup process itself, Backup Genie also protects the files from loss or destruction by storing all data on Amazon S3 secure systems. Multiple datacenters store all Backup Genie file, so that users will be immune to any weather-related technical malfunctions.

Like many online backup providers, Backup Genie provides live support via email only, and this assistance is available 24/7.  Users can find answers to their most pressing questions in the company’s FAQ section which is organized according to topic and responds to most standard questions as well as a few less-common ones.  Backup Genie also offers several video tutorials that provide step-by-step guidance relating to a select group of topics.

Backup Genie offers the ultimate in flexibility by providing automatic backups as a standard feature as well as the ability to schedule backups or to backup specific files on demand.  Likewise, multiple plan offerings allow potential Backup Genie customers to save money by paying only for the storage that they need.  With reliable Amazon S3 servers and an interface that is suitable for customers at all technical levels, Backup Genie provides a service that will satisfy nearly every type of user.

Editors Rating: 8
Visit Site
Disclaimer The information presented on this site has been compiled by our editorial team, and although we make every effort to keep it up-to-date, misrepresentations and inaccuracies are possible. We recommend that you contact the providers listed below directly to verify any information that's of importance to you. The ratings in our listings are based on our research. Some of the providers listed pay referral fees to this website and even provide us with free access to their platforms, which may at times impact the order and manner in which they are presented. We take no responsibility for the accuracy of information listed below, though we do update it regularly. This information is subject to change at any time.