Livedrive is a British online backup provider that serves over 500,000 clients worldwide, including individuals and well-known corporations such as PC World, CompUSA and TigerDirect.  Unlike other online backup services that offer backup and syncing in one package, Livedrive differentiates these services into different packages so that users can pay only for the services they need.  The backup of only one computer is included in the company’s most basic backup plan, but users can backup additional PCs for only $1.50/month, or opt for the company’s business plan which covers up to 5 PCs.
To learn more about Livedrive, visit Livedrive.com.

Whereas many other online backup providers such as Backup Genie and MyPCBackup offer limited backup space in their most basic plans, Livedrive differentiates itself by offering unlimited backup with even their most basic plan (which is appropriately known as the Backup plan).  Livedrive also offers file versioning for up to 30 prior versions of each file, a service which can provide peace of mind for anyone who may need or want to access past versions of an important file.

It is important to note that many features that are offered by other backup providers are only available in Livedrive’s upgraded “Briefcase” plan.  Among these features are the sharing of files with others (including sharing via social media websites), editing files directly in a web browser and the ability to email files to Livedrive and to have them added to the user’s file by the Livedrive team.

Other notable features of the Backup plan include:

Livedrive is extremely easy to use, and the company offers a free 14 day trial so that users can see for themselves just how straightforward the service is.  Setup of Livedrive was complete in only a few clicks, though it did trigger a warning from our antivirus software, which we successfully ignored.  It was especially refreshing to see that Livedrive warned that the initial backup may take some time and that it was not a problem to continue using the computer as usual during the backup process, and even to restart the computer if necessary.

Unlike other online backup providers that instantly backup the user’s entire computer (unless the user specifies otherwise), Livedrive’s installation process begins by asking the user exactly which files he/she wants to backup, and backing up only the selected files.  Once those files are backed up, Livedrive will back up the files regularly.  During our trial of Livedrive, the backup ran approximately once every hour.  Livedrive users wishing to backup new folders should confirm in their dashboard that the new files will be included in the regular backups.  Finally, it is of significance to note that during our test, Livedrive’s backups ran very efficiently and did not seem to slow down the computer in any way. 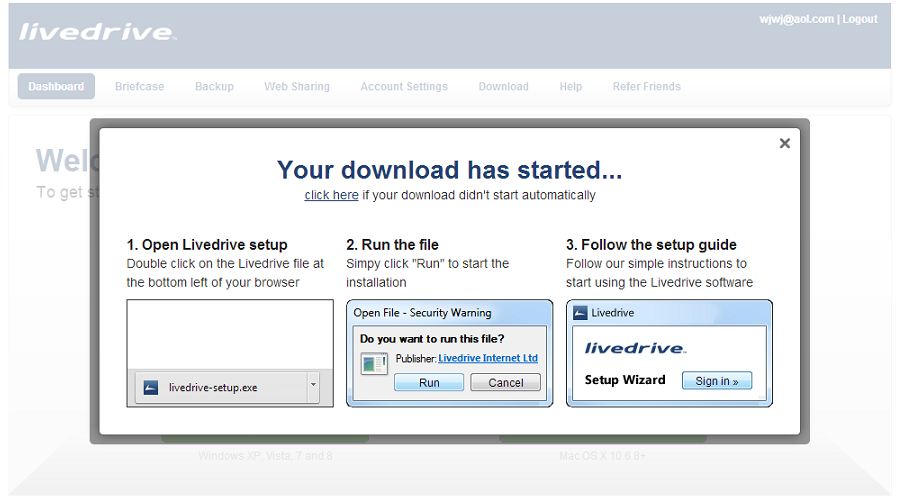 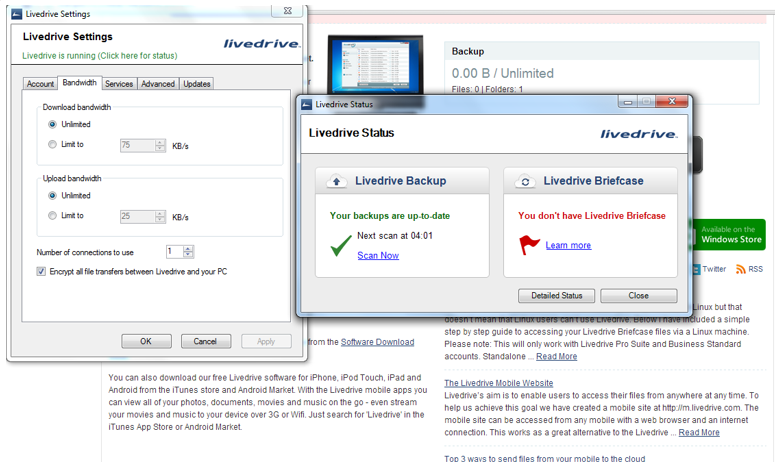 Livedrive offers 4 different plans; the Backup plan, the Briefcase plan, the Pro plan and the Business plan.  Users can opt to pay for each plan for either one month, one year or two years.  As is the case with all other online backup providers, the monthly price for those choosing a two year plan will be discounted as compared with the pricing for shorter terms.  The most affordable option is the Backup plan, which is available for as low as $6/month for the two year plan, and for $8/month for those who wish to pay monthly.  The Pro plan starts at $19/month and provides unlimited backup for up to five PCs and is $25/month for those who wish to choose the monthly payment option.  The Briefcase plan which is the plan that offers up to 2TB of file syncing between users starts at $12/month for a two year plan.  Finally, the Business plan can be purchased for as low as $37/month.

Unlike some online backup services that provide fully private backup, Livedrive offers users of some plans the options to backup files and to share them publicly.  For this reason, some Livedrive files may actually be accessible to a wider audience than just the Livedrive user and his or her friends.  That being said, the company is very open about their use of military-grade 256-bit encryption to transfer all files from the user’s computer to the cloud as safely and securely as possible.  During our Livedrive review we found that users even have the option to login to their dashboard using SSL if they wish, illustrating the company’s commitment to security from start to finish.

Live customer support is available from Livedrive via the company’s ticket system.  Though many online backup companies offer live support via email only as Livedrive does, this company sets itself apart by offering technical support via its designated support console so that the inquiries will get directly to their target technician and will not be merged with sales inquiries or other non-related emails.  Livedrive users can also browse over 200 FAQs and technical articles, as well as dozens of guides that are designed to assist new Livedrive users.

With unlimited backup in every package, Livedrive is an ideal online backup solution for anyone who wants to backup heavy files such as music or videos, as well as standard computer files.  Likewise, the ability to restore files for up to 30 days makes Livedrive ideal for anyone who has the need to access past files or may want to review a prior version of a document or other file type.  The service is easy to install and to run and it runs seamlessly in the background of every computer, working efficiently while allowing the computer user to do the same.

Editors Rating: 8.5
Visit Site
Disclaimer The information presented on this site has been compiled by our editorial team, and although we make every effort to keep it up-to-date, misrepresentations and inaccuracies are possible. We recommend that you contact the providers listed below directly to verify any information that's of importance to you. The ratings in our listings are based on our research. Some of the providers listed pay referral fees to this website and even provide us with free access to their platforms, which may at times impact the order and manner in which they are presented. We take no responsibility for the accuracy of information listed below, though we do update it regularly. This information is subject to change at any time.